As contemporary artistic practice has become ever more polymorphous and multispatial, large scale exhibitions have accommodated a wider array of emerging nonmodern epistemologies, materialities, and temporalities ‘in the middle’ (Latour, 1993, 47). As a critical means of considering contemporary art’s homologous non-modern, this paper refracts two influential global exhibitions of contemporary art – dOCUMENTA (13) and Il Palazzo Encyclopedia – through the lens of Medievalisms Studies. Medievalisms Studies’ challenge to the ‘simplified binarization of premodernacts and modern identities’ (Fradenburg, 1997, 213) invites deeper scrutiny of contemporary art’s knowledges, materialities, and chronopolitics. Developing the medievalist analogies of the compendium and the relic, I focus on specific exempla presented within the curatorial frameworks of two key biennale that offer a macro-cosmic discourse on contemporary art’s developing relations with knowledges, materials, and time. In unfolding anachronic materialist narratives, a nonmodern sensibility promised to liberate emerging art from the social constructivist paradigms that still dominate contemporary art. As a corollary of their nonmodern materialist epistemologies, the biennale that form my exempla also attempted to (dis)place the practices they curated through a polytemporality in which now-and-then and here-and-there areintertwined.

Link to article in postmedieval 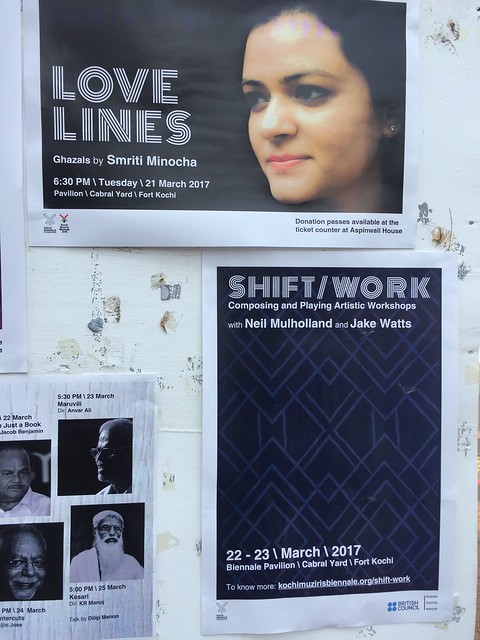 Art today tends to lodge in spaces. ‘Nice space’ all intone in unison when encountering yet another opening in the great white indoors. Such spaces are significantly devoid of detail – they take little time to consume and are non-confrontational in their uniformity. They are contracted, omnipresent, rootless and dynamic – they exist in similar forms in every town and city in every nation. Art experienced in such prefabricated contexts is always something comparable and measurable. Open for public consumption, it is everywhere and has no centre. Experienced without circumferences, without place, art is at once internationally accessible and perpetually in danger of being diluted by its anodyne surroundings. This is a dilemma of sorts. What can be gained in terms of polydiverse frission is often lost in terms of the unique promise of spatial eccentricities.

The back garden is, in contrast, a unique place, one carefully tended to and composed by the gardener. It’s a private place, accessed by invitation only. It is a relatively settled point in a world of unfettered circulation and virtuality. It is the antithesis of the purpose built art space, that ghost of internationalist avant-garde bohemia. It signifies suburban comfort, a substantial personal investment, a hardy perennial in a culture of flux. The back garden’s perfect pollinated light makes it the nemesis of the unmanaged creativity of the dimly lit city street. It is an aspirational place, the modern equivalent of the aristocratic estate, its powerful displays of material wealth scaled down to fit the bourgeois pocket. Like the large estates of imperial Europe, the back garden is a manicured aestheticised response to nature, and, by extension, a metaphor for control of the lawlessness perceived to lie beyond its walls and fences. It is also, in many respects, alien to Scottish urban life, the shared tenement drying green being more commonplace in Scottish towns and cities.

All of these factors serve to make back gardens unfashionable; they do not square with contemporary global pressures to reorganise places into more economically flexible spaces, nor do they significantly enable or extend our right to public recreation. Place is out of style – subsumed by all embracing space. This doesn’t mean that place isn’t desirable. On the contrary, place, being in such short supply, has never been in greater demand. Perhaps this is what makes place-making such a prerogative for city planners and citizens alike. Place rarity is related to it being so difficult to nurture. Unlike space, place can’t simply be planned into existence – it has to be given time and the resources to take root and grow organically. To invite artists to work in a place, as opposed to a space, challenges many of the urbanite / internationalist assumptions that underlie contemporary art practice. It also encourages artists to directly confront what has been developing within the mass culture of our time.

The back garden has been at the epicentre of the cultural revolution of the past ten years – a political process wherein the adoption of middle-class lifestyle has been ceaselessly promoted as a one-size-fits-all solution to all socio-economic woes. The roll out of ‘how-to’ via TV cooking, fashion and gardening programmes and websites such as VideoJug has become symptomatic of early 21st century mass culture – an atomised culture of domestic improvement presented as universally accessible and desirable. There is a parallel here with moral justifications of unstructured time, leisure and land ownership from an aristocratic past. Today, in mainstream UK culture, place-making and domestica (often seen as synonymous) are moral prerogatives.

The message that today’s Percy Throwers and Fanny Craddocks send us with incessant regularity is that to place-make is not merely conducive to economic health, it is to cultivate a more hospitable environment for the consumer-self. It is the key to happiness and success for all. The logic is circular and, like some plant life, auto generative. Cultivated improvement is cultivated by the cult of improvement. Moss covered urns toppled by cascading floods of whispering rococo vine for all. ‘Art’ is equally subject to this craze for pro-amateur DIY demystification. Art 4All. And so – the enculturalisation of domestica and the presage of autodidactic self-organisation are ideal bedfellows.

D-I-why? Despite its shortcomings, if the logic of ‘how-to’ has germinated the seeds of place-making en masse; its healthiest shoots can be trained to the worthwhile end of communitarian recovery. In this light, the garden relates to an Epicurean etymology: a place of contentment. It represents the antithesis of The Academy – it is an unsanctioned and potentially subversive arena. Withdrawing temporarily from public spaces officially endorsed by both business and the state into a sheltered Atlantis of like-minded people ruled by friendship, the back garden can be transformed into a place in which public space can be rethought and rebuilt from the ground up by the public. Summer days of splendour slow things down and allow them to be experienced in real time. Culture grows best in the fruitful’st soil. This garden’s sickle needs no hammer. The Back-Garden Biennale has more in common with Reggie Perrin’s commune for middle-class neurotics than with William Blake’s anarcho-symbolist garden. It need make no extravagant claims to transcendent moral and aesthetic value or to wider social justification. It is simply a place for learned leisure and the cultivation of cultivation – a place for art practices rather than a space for an art careers. The seeds were sown some time ago, let’s see what grows this year.